As Teen Eating Disorders Soar in the Pandemic, YA Novel Tackles a Serious Problem

When author EJ Schwartz started writing her young adult novel about eating disorders just before the Covid pandemic hit, she had no idea the timeliness of its publication. The number of new cases of children and teens with eating disorders has skyrocketed since the pandemic began in early 2020.

The novel, “Before We Were Blue”, is set in Recovery and Relief (RR), a fictional American residential treatment center where protagonist Shoshana Winnick first undergoes treatment for anorexia. The other main character, Rowan Parish, a longtime anorexic, is a veteran of residential therapeutic settings.

The two teenage girls meet as “gray girls” at RR, which means they’re high-risk and require constant supervision, especially when eating. These residents are assessed weekly to see if they have progressed enough to descend and become “blue girls”, who are allowed to self-monitor at mealtimes and engage in physical activities such as dancing.

The novel begins with Shoshana, Rowan, and others discussing a discharged patient who they heard had died by suicide.

“Remember how she faked her period so they lowered her goal weight, and she put on the last five pounds by putting quarters in her underwear, and then went out on early release?” said one of the girls in a rather neutral tone.

Author Schwartz, 25, drew on her own experience with an eating disorder when writing “Before We Were Blue.” This includes his familiarity with online “pro-ana” and “pro-mia” communities, as well as “thinspiration” social media content.

“I drew on my own experience, the experiences of my friends, and did research for my novel. I’ve never been in a residential treatment program, but I’ve interviewed professionals who work in some of these places,” Schwartz said.

The sharp increase in anorexia, bulimia and other eating disorders among young people during the pandemic means that in real life, inpatient eating disorder treatment programs, as well as those in outpatient, currently have long waiting lists.

The lack of treatment available was highlighted in Israel when the Knesset devoted an entire day on February 15 to the subject and what is being done to help the estimated 100,000 Israelis (the vast majority aged between 15 and 24). who suffer from them.

A report prepared by the Knesset’s Research and Information Center revealed that the recent rise in cases of eating disorders has far outstripped existing treatment options in the country, both in the public and private sectors. With eating disorder cases jumping about 56% between 2019 and 2021, there simply aren’t enough clinics, hospital beds and trained staff. 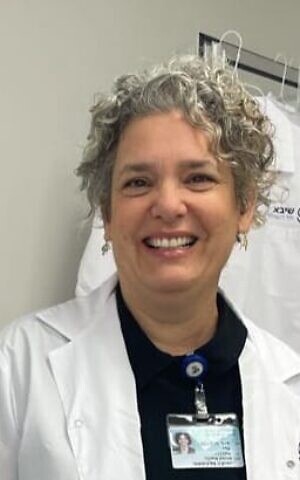 Haaretz recently reported that in Sheba’s program, the largest in the country, there are hundreds of teenagers (mostly girls) on the waiting list to enter. It can take up to a year right now for a spot to become available. Thousands of other girls are waiting for places available at other locations.

The same problems are observed outside of Israel. Devorah Levinson, director of the eating disorders division of Relief Resources, an international mental health referral organization for Orthodox Jews based in the United States, struggled to respond to the request for help.

“In 2021, we had 345 new cases, two-thirds of whom are between 13 and 25 years old. Before Covid, we had an average of 230 new cases per year. Aid access slowed, especially at the start of the pandemic,” Levinson said.

Sheba’s Dr. Enoch-Levy emphasized how important it is to identify and treat eating disorders early. There is no time to lose, as patients are unable to cooperate with psychotherapy and medication will not help them until they regain some weight. But with the backlog caused by the pandemic, it is difficult for most parents to start the treatment process for their children.

When every man is an island

A distorted body image is at the heart of most eating disorders, according to Enoch-Levy. The isolation imposed on adolescents by the pandemic has amplified this distortion for many.

“Covid served as a trigger for children vulnerable to eating disorders and other psychiatric illnesses,” said Professor Yoav Kohn, director of the Donald Cohen Department of Child and Adolescent Psychiatry at the center. Jerusalem Mental Health and Eitanim Psychiatric Hospital.

Being forced to stay home for so long, away from friends and regular routines, made teens feel a loss of control over their lives. Some have turned to severe restrictions on their food intake or extreme exercise to regain control. In some cases, parents’ well-meaning warnings to children against overeating while cooped up at home have had unintended negative consequences. 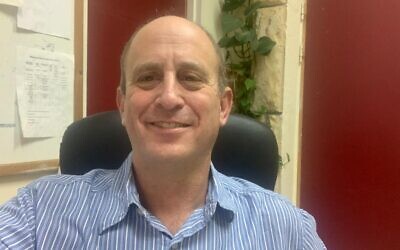 However, long before Covid emerged, social media played a dangerous role in triggering vulnerable young people, whether because they have co-morbid mental health issues such as anxiety, depression, suicide , OCD or PTSD, or because of a genetic predisposition. (Kohn cited studies showing that if the risk of anorexia in the general public is 1%, it is 10% for someone with a sibling or other first-degree relative with anorexia, and 50% for identical twins.)

Enoch-Levy noted that anorexia and bulimia communities can overlap. “There is a lot of transition between eating disorders. For example, 60% of anorexics also become bulimic,” she said.

Psychiatrists Enoch-Levy and Kohn both say social media platforms like Instagram and TikTok have become more central to teens’ lives over the past two years, and they’re seeing the ill effects of that.

An October 2021 New York Times article quoted Chelsea Kronengold, spokesperson for the National Eating Disorders Association, as saying, “Social media in general does not cause eating disorders. However, it can contribute to an eating disorder. The article goes on to say that “the association advises social media companies to remove content that explicitly promotes eating disorders.” 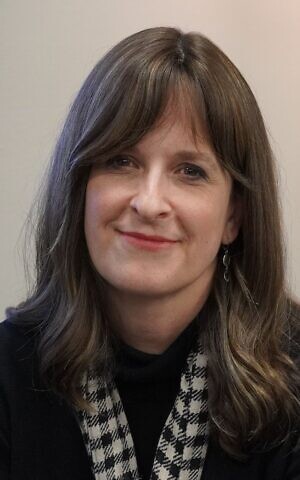 Relief Resources’ Levinson pointed out that ideals of good looks and even a drive to be thin are prevalent in Orthodox Jewish communities, which claim to insulate themselves from outside influences.

“The Orthodox world has several intentional buffers against the influence of secular culture, but with the advent of the internet it has become more difficult to limit this exposure. Children may not be on social media as much as they are in the secular world, but many Orthodox shop online, where they receive negative messages seeing the thin models wearing the clothes,” Levinson said.

“As a result, Orthodox clothing manufacturers are under pressure from customers to make clothing in smaller sizes and slimmer designs. Orthodox magazines published articles about families and girls on diets and ran advertisements urging young women to lose weight to shidochim [dating for marriage],” she says.

“Before We Were Blue,” Schwartz’s first book, is rated YA Literature for Ages 13 and Up. However, it’s more appropriate for high school and older students, she says.

Written from the alternating perspectives of Jewish Shoshana and non-Jewish Rowan, it deals not only with difficult content related to psychiatric and eating disorders, but also with the co-dependency between the two protagonists. 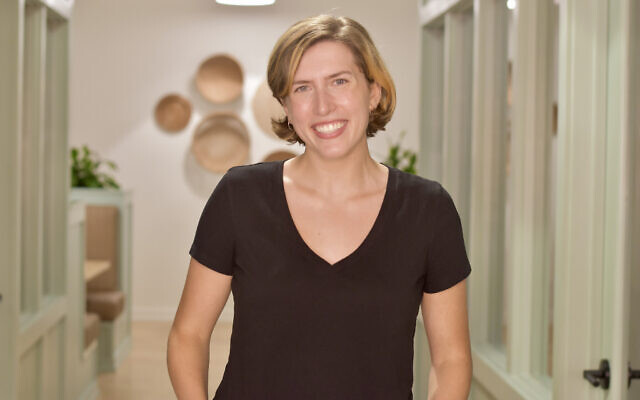 EJ Schwartz (Lee Lapalucci) author of “Before We Were Blue”

“There’s an intensity, a longing in female relationships, that’s natural to youth and never leaves us. It’s a best friends versus the world thing,” Schwartz said.

Although Schwartz said she deliberately put distance between herself and her characters, there’s a lot of authorship in Shoshana. Like her fictional protagonist, Schwartz grew up in New Jersey in a strongly identified Jewish family and thought a lot about what she believed religiously and why.

Schwartz also drew inspiration from her own years as a competitive gymnast and cheer athlete when creating Shoshana. In the novel, Shoshana finds herself in the residential program after starving herself to stop her growth spurt so she can maintain her exceptional tumbling skills – and her slim appearance in the skimpy cheer uniform required.

Shoshana has to deal with her coaches’ cruel methodologies and low-level anti-Semitism, as well as the TV cameras constantly trained on her while filming a reality show similar to Netflix’s hit “Cheer.”

Shoshana’s personality profile fits well with many young people who succumb to eating disorders, according to psychiatrist Kohn.

“Persistent and competitive people may have eating disorders more easily because they are willing to over-exercise and under-eat,” he explained. 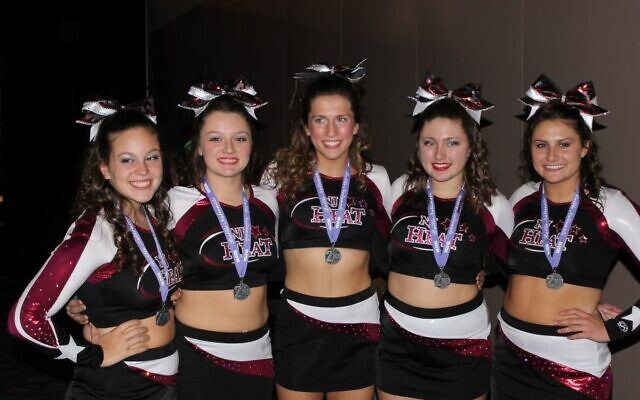 EJ Schwartz (center) as a 16-year-old at the 2013 “Battle at the Capital” cheering contest in Washington, DC. (Courtesy)

Levinson said he has seen a factor of OCD scruples evolve from religiosity among anorexic teenagers and young men in the Orthodox world. With Orthodox boys leaving home as teenagers to attend boarding school yeshivas, parents are not there to perceive extreme changes in weight.

“We need rabbis familiar with mental health issues and eating disorders. We try to educate the rabbinical community,” Levinson said.

In his experience, competent rabbis prioritize the best clinical care for those who suffer. For example, they will allow a patient to eat non-kosher food if a treatment center cannot provide kosher food.

According to Schwartz, the takeaway from “Before We Were Blue” is that it’s time for girls and young women to break free from what society has told them to be – smaller, more delicate, prettier, calmer and more polite.

“These are learned behaviors, and it’s time for girls to unlearn them,” Schwartz said.

“This novel is quite dark and readers won’t come away with solutions, but I think it’s a story young people should be reading right now,” she said.

This article contains affiliate links. If you use these links to buy something, The Times of Israel may earn a commission at no additional cost to you.