What does it mean when we say, “Thank you for your service”?

We spoke with military veterans for this episode of The Heroes. Lew Roman, chairman of the board of the Broomfield Veterans Museum, defined a hero as someone who saves someone else’s life. A more nuanced definition would include going above and beyond to help others.

Like many of the heroes we’ve covered so far, they were all hesitant to call themselves heroes. In some cases, it’s modesty. In others, their reluctance may be fueled by disappointment in their experience in service or when they returned home as civilians. Yet they were quick to recognize the heroism shown by their peers in service to our country as well as in their daily lives.

It is important to remember that in addition to combat operations, all six branches of the military train young people to become teachers, nurses, firefighters, and police officers, among many other professions. Thus, the army can be the most productive training ground for heroes.

Even so, there is no monolithic “veteran experience”. Although many veterans lead successful lives after their service, they are also at increased risk of mental illness, addiction and homelessness. When these people fall through the cracks, their fellow veterans often step in to help them. Their service doesn’t stop when they trade in their uniforms for street clothes. 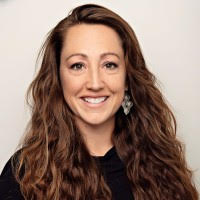 Samantha Gehrels joined the US Army after graduating from high school. She was trained in military intelligence before joining the National Security Agency where her main responsibility was to intercept and decode signals. “We’re not just talking about emails and phone calls,” she said. “We obtained footage of a billboard containing encrypted information. This information revealed the position of enemy troops and was used to steer American troops away from dangerous locations. We used this information to save lives.

Gehrels became a specialist in military trauma medicine before earning a master’s degree in nursing. She is now a nurse practitioner specializing in palliative care and palliative care. “On the ground, we try to stop severe bleeding and get them to the hospital as quickly as possible,” she said. “In hospice, we know the end is near. My job is to help them come to terms with the end.

When caring for veterans, she feels grateful for her experience in the military. “The army is more than a job, she says, it’s a way of life. I communicate quickly with veterans because we have had similar experiences. They can reflect and reminisce with me in a way that they cannot with a civilian,” she continued. “Helping them find peace at the end is very important to me. That’s what keeps me going.”

Forced by the events of 9/11, Josh Gerhels joined the US Army as an 18 Delta. “It’s the special forces, the medical sergeants,” he said. Josh and Samantha met about 12 years ago while conducting trauma medicine training in North Carolina. Soon after, Josh was helping Samantha fence in her 8-acre horse property in the scorching summer sun. “It’s love right there,” Josh said over the phone.

As the Gehrels prepare to celebrate their tenth anniversary, he was somewhere in Africa working as a contractor for the Department of Defense. “We take someone who is having a really bad day,” he said, “and try to make them better. We try to bring them home to their families. Josh said he also feels the need to return home to his family, because the sacrifices – missed birthdays, sporting events and graduations – weigh heavily on him. “A lot of people think we are afraid of losing our life or a limb, but in reality, we are afraid that our families will miss growing up.”

Asked about the heroes in his life, Josh spoke quickly and sincerely. “Samantha is the reason our situation works,” he said. “When she’s not caring for people on their deathbeds, she’s caring for our three children. She is a strong woman who has been made stronger by her military service. It teaches you to be more selfless while meeting numerous and ever-changing challenges.

Josh appreciates strangers thanking him for his service, but he wishes there was more awareness of common veteran challenges. “Many suffer from mental illness, homelessness, addiction,” he said. “For some, going to work every day is more difficult than living in a combat zone.” 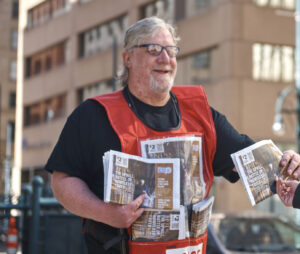 Brian Augustine served in the US Army from 1979 until 1981, when he was discharged. “I had a nervous breakdown in Germany after my girlfriend left me,” Augustine said. “I had no American friends, I was so lonely. After that they said I was ‘unable to adjust to military life.’

Augustine works as a writer and salesperson for the Denver Voice, an independent weekly whose mission is to tackle the “roots of homelessness by telling the stories of people whose lives are impacted by poverty and homelessness… “. He became homeless after repossessing a house he bought with his brother. “My brother took out loans that I knew nothing about,” Augustine said, “and they took our house.”

Until the pandemic, Augustine was making enough money writing to rent a room on Capitol Hill, which was no small feat, considering he had learned to read with a dictionary and a copy of “War and Peace” by Leo Tolstoy. But as rents soared across the country, Augustine’s savings quickly ran out. “I can’t afford this room anymore,” he said.

As he turns 61 in July, he is preparing to live on the streets again. Although there are a number of programs in place to help the 40,000 veterans who are homeless every night in the United States, Augustine said finding housing is more difficult in the face of health problems. mental, “which affects our self-esteem”, he said. “The Bible says we should love our neighbor as we love ourselves – but what if I don’t love myself?”

Augustin dreams of having a house of his own again. “A house,” he says, “with enough land to keep a pack of dogs. Making them happy makes me happy. 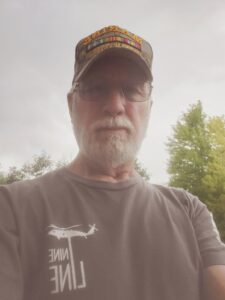 Leon Bartholomay joined the 1st Marine Division, 11th Marine Regiment, an artillery battalion, in 1968. Before long, he was in Vietnam helping defend his compound against what he called a mini Tet offensive. “A group tried to run over us,” Bartholomay said, “but they tried to cross two positions where machine guns had been set up. It didn’t work too well. The next morning, Bartholomay said, “we recovered about 20 bodies.”

Today, Bartholomay is the master of the coda and the adjutant of Post 2601 of the Veterans of Foreign Wars in Longmont. The VFW is a fraternal organization where veterans can connect with other veterans. “We help them connect to Veterans Affairs for medical care,” Bartholomay said, “We help them with their GI bill. When they can’t get mental health care, we listen to them.

Echoing Josh Gerhels’ concerns, Bartholomay said 22 veterans die by suicide every day. “It has to stop,” he said. “Veterans of the First World War helped us. Now they are gone. Over time – most of us Vietnam veterans are over 70 – the next generation will have to take our place. 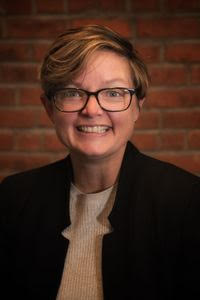 As a young woman, Jennifer Parenti dreamed of becoming an astronaut. To achieve her dream, she needed an engineering degree and she had to attend a flight school. She was accepted into the Air Force Academy in Colorado Springs after graduating from high school. “They give you four years of education and a stipend in exchange for four years of service,” Parenti said. She gave 20 years of service to the US Air Force before retiring.

Her dream of becoming an astronaut was dashed by a medical disqualification, so she became an engineer. Then she joined the International Airmen Program, the diplomatic arm of the Air Force. In this role, Parenti worked to foster collaboration between the US Air Force and other similar organizations around the world. “If we go to war,” she said, “we can collaborate with the air forces of other countries.” After working at the Pentagon and the US Embassy in Paris, Parenti was hired by NATO to continue the same job.

Parenti returned to Colorado in 2019, where she is running for a seat in the Colorado House of Representatives. “I run on a traditional progressive platform,” she said. “Housing affordability is a problem in the 19th arrondissement. Transport instability is a problem. Preserving the environment is important to me. All of these issues are linked, she said, and veterans are disproportionately affected. “Whether I am elected or not, she said, I will continue to fight for our veterans. 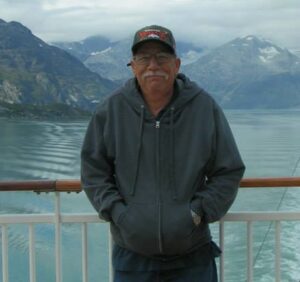 Lew Roman said his journey to becoming chairman of the board of the Broomfield Veterans Museum was not heroic. “A hero is someone who saves someone else’s life,” Roman said. “I didn’t save anyone. I just kept the shelves stocked. Roman joined the United States Navy in November 1968 because he “didn’t want to be drafted into the Army and sent to Vietnam”. Instead, he was sent to storekeeper school in Rhode Island. “Then I was sent to Vietnam to run a store on a houseboat,” he said with a laugh. “It’s poetic justice.”

After spending a year there, he returned to the United States to pursue a degree in accounting. He joined the US Post Office as a clerk in 1986, retiring 20 years later. “Then I got really bored,” he said. “I had to find something to do.” Thus, Roman joined the collections department of the Broomfield Veterans Museum and was put in charge of the presentation and exhibition committee. Today, as chairman of the board, he sees it as his job to preserve the stories of heroes. “If we don’t preserve these stories, they will be lost,” he said.

“When we thank veterans for their service, we need to know what we are talking about.